MUPS, or “multiple unit pellet system”, is a solid dosage form in which the granulation consists of a mixure of active, coated pellets and powder excipients. MUPS products include, for example, compounds to counteract excessive acid formation in the stomach, heartburn and acid reflux. A key reason for this is their short dwell time in the stomach and the resultant reduced irritation of the stomach lining.

In principl, the structure of MUPS compounds resembles that of core-coated tablets. Instead of an exclusively powder mixture, core-coated tablets consist of a tablet core, which is sparingly coated with a very easily compactable powder during the compression process. Instead of featuring a single core tablet, MUPS involves a large number of small, active ingredient-laden pellets, which are coated sparingly to avoid damage during the compression process. The pellets are roughly sized between 100 and 2000 µm. Their outer shell consists either of powdery extenders and excipients, disintegrants or a supplementary active ingredient. This coating is key to the most important delayed active ingredient delivery parameters. It determines where, when and how fast active ingredients are released and can also mask unpleasant active ingredient tastes. As far as incompatible APIs are concerned, there is the option of producing tablets in multi-layer pellet form.

In contrast to standard tablets, MUPS pellets tend to act more like a liquid in the stomach and, given their small size, they move independently to a very large extent. Faster but controlled solubility enables them to pass quickly and gently through the esophagus and stomach at a high degree of bioavailability. The aggregate API dosage is portioned among a large number of small pellets. Accordingly, this makes digestive tract dwell time easier to predict compared to multi-layer tablets. The active ingredient release profile can be precision-calibrated by very accurately adjusting the coating layers. Accidental chewing of these tablets, which in the case of conventional compounds can result in (toxic) overdosage - so-called “dose-dumping”, therefore does not significantly alter active ingredient release.

Batch mixing that features uniform MUPS distribution is production-critical. The mixture of fine powder and more coarse pellets is however highly vibration-sensitive. Larger MUPS can act like filtration meshes, which means that even slight vibrations can cause the fine particles to trickle downwards and collect nearer the bottom of the powder  bed. Even very modest, permanent  production building vibrations can result in this  percolation effect, which results in the segregation of powder and pellets, and negatively impacts content uniformity.

KORSCH tablet presses, including the XL 400 and the X 3, feature a particularly low-vibration design especially for this purpose. The proven carrier plate design, which includes a spring-damper system, was patented for the XL 400, and enables the machine frame and the compression zone to be almost entirely decoupled from one another. This prevents process vibrations being transmitted to the head piece, machine base, and ensures no percolation of the pellets as the granulation is directed to the feed frame.  In addition to a vibration free feeding process, it is critical that the pellets are not damaged in the feeder, as the granulation is fed into the dies.  The KORSCH feeder design, featuring an extended feeder length, and round paddle configuration, ensures precision die fill without damage to the pellet structure.  Alternatively, KORSCH offers a passive, gravity feeder design, which has no rotating paddles, and is therefore quite effective to transport the granulation wiitout damage to the pellets. 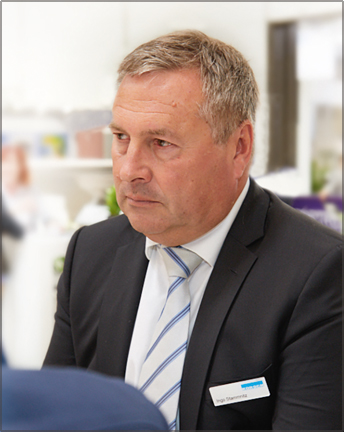